A snake catcher was recently required to catch and relocate a 1.7 metre carpet python from Chapel Hill, after it made a meal out of a reasonably sized 4.5kg brush tail possum. Snake removal expert Bryan was called out to attend to the dramatic scene at 8.30pm last Tuesday after a called from the distressed homeowner. “He wanted to know if it was going to stick around. The thing is once you’ve got a meal that large in your stomach, you’re not going to go too far are you?” Bryan said. A huge carpet snake sure is an unusual but effective possum deterrent! 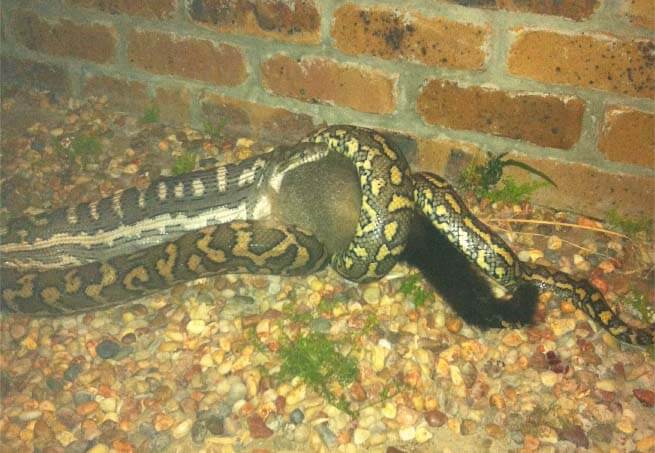 After waiting for the python to finish it’s meal, which took almost an hour, the snake control expert carefully caught the snake and placed it into a large sack for relocation. “We carefully bagged it up and made sure the snake didn’t get distressed and throw the meal up.” After moving it to an area where it was able to rest and digest it’s massive meal in a quite and safe environment, the snake was taken away to a more hospitable habitat away from Brisbane suburbia. Unfortunately the possum in question was unable to be saved. 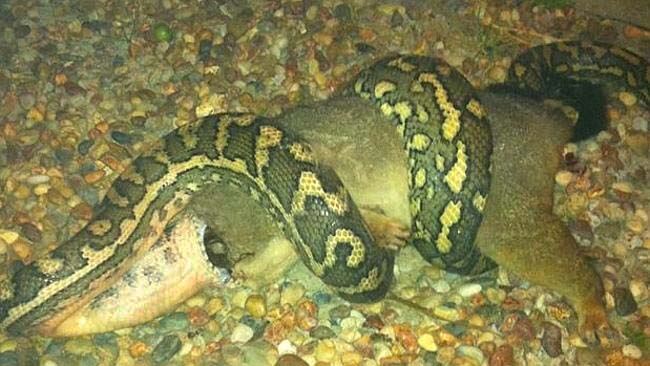 Carpet pythons which are commonly found around the forested areas of Brisbane and all of South-East Queensland have been known to eat small dogs, cats, flying foxes, guinea pigs, and birds. Now that the weather is heating up there will be more Brisbane residents finding snakes in their homes and around their properties. While carpet pythons won’t generally attack humans, there has been an increasing number of the deadly eastern brown snake on the north side of  Brisbane area lately. These snakes are highly mobile and travel across large distances looking for mates.

If you see a snake of any kind, rather than try and catch and relocate it yourself it is always best to get in contact with a pest control expert who knows how to safely handle these creatures. This is even more important if you don’t know what kind of snake you are dealing with and if it is poisonous or not. Don’t risk getting bitten.

If you need help with snake removal get back to our homepage and fill out our quick enquiry form to have one of our snake removal experts our to quickly and safely remove and relocate the potential threat.