Threat Of Macao Paper Wasps Making Their Way To Australia

The news about the presence of Macao Paper wasps in 2015 in Cocos (Keeling) Islands didn’t raise much attention at first. But what has made most entomologists concerned is the rate at which these pests are multiplying on the island and possibility of spreading to the Australian mainland. In case of mainland infestation, it will not only be a threat to agriculture but may also change the way of life for locals. With a distance of 2,130 kilometres separating the mainland and the islands, there is every reason to get worried.

It is believed that the Macao Paper wasp arrived on the Cocos (Keeling) Islands by hitchhiking on an asylum seeker boat. According to Marc Widmer, Department of Primary Industries and Regional Development entomologist, the population of wasps has been increasing in a way greater than they imagined. He has been working with the federal Department of Agriculture since 2016 in an attempt to eradicate this pest, but it’s proving a difficult task. “We were astonished by the explosion of these wasps and literally the number of nests that we started to find,” he said.

According to Mr Widner, one nest was found in 2015, and after some time there were a couple of them. But by the end of the year, they had destroyed over 150 of them showing the capacity for them to spread. If the pest is not taken seriously, and allowed to multiply at this rate, they might soon be out of control on this island, increasing the chance of it reaching the Australian mainland sooner than we expect.

What Could Be Impacted? 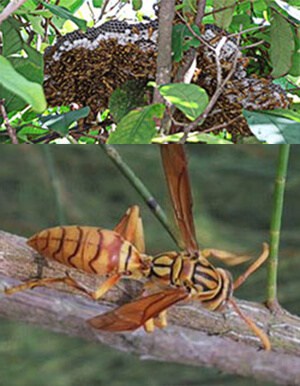 Although research into the Macao Paper Wasp is limited, Mr Widmer believes that the pest would affect flora and fauna. Up to date, there has been no comprehensive study or research into these pests, but Mr Widmer mentioned this -‘they obvious multiply in high numbers very quickly. They have a very aggressive colony defence, and their sting is really painful – I can confirm that myself’. “Macao paper wasps usually have large colonies – around 600 wasps per family in pizza-size nests” he added. The nests are usually quite hidden, so it’s easy to accidentally step on/stumble upon them, and that can have serious implication as they try to keep the enemy/intruder away. If you can’t run and get away quickly, then you might receive some painful stings, according to the entomologist.

Although their nests are mostly in trees, they can also nest in houses, and that’s another reason why the mainland should be concerned. As predators, the wasps are obviously going to disrupt the local biodiversity through direct food competition and space. But according to Mr Wedmer, they have no concrete evidence of what the pest can do to higher-order organisms apart from the painful sting which can trigger an allergic reaction in humans.

Mr Widmer believes that failure to control these wasps could have a serious impact on people living on the island and possibly those on the mainland due to its size and aggressiveness. For instance, he got stung through his bee suit and thick jeans. They’ve got a sting that’s almost 10mm long that can penetrate any clothing including leather gloves. That’s how aggressive these pests can be. If they can manage to crossover to the mainland, they will definitely disrupt the way of life for locals. 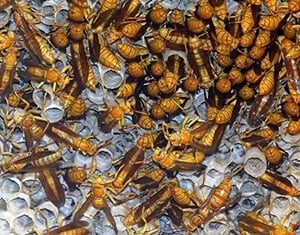 According to Mr Widmer, this could be one of the most destructive pests if it made its way into mainland Australia. According to the entomologist, the wasps are likely to cause economic damage to date trees, peaches, grapes, and figs amongst many other plants. This would significantly affect farmers in the regions that deal with plants as cash crops. It’s also important to note that the wine industry would be the most affected by this kind of infestation. This just one of the areas that the entomologists think could be affected, but the pest could turn out to be more destructive than this to a broader range of plants.

Mainland Australia should be worried since there isn’t a huge distance between Australia and the islands. Mr Widmer also notes that the wasps are very good hitchhikers and they can easily find their way to the mainland through shipping and other trades. Initial study show that they could be spreading to the nearby islands. “As of now, they found their way to some islands 7 km across the lagoon. That’s probably too far for the wasp to fly” he said. “This is a clear indication that they might have used the boats traversing the islands and that’s a risk to Australia,” he added.

According to Marc Widner, this is a yes. The eradication process that started about a year ago is expected to yield positive results. Although heavy rain on the island this year has retarded the propagation by destroying the nests, it’s expected to get better when it clears up- the wasps will start making new nests making it easy for eradication.

A successful eradication is the only way to protect mainland Australia from Macao paper wasp infestation. As of now, our team here at PCNB just hope that the eradication process is a success so that we can rest in peace.